A major component of Digital Archaeology and Structural Analysis involves creating digital models of rooms and entire structures. 3D models vary by the ways they are created and the formats in which they are rendered. Models derived from photogrammetry and laser scanning capture surfaces, often in considerable detail, and are highly useful in visualizations and studying aspects of layout, construction, and modification over time. Solid models, by contrast, are created by subtracting negative room spaces from a larger building solid, which can be assigned structural characteristics based on construction and foundation materials – earth, solid stone, rubble, wood, etc. These models can then be tested through simulated stresses (erosion, seismic activity, high impact events) to reveal how and why structures collapse, and enable cultural heritage preservationists to anticipate and take steps to prevent damage. The Digital Elmina Project pursues both of these modeling strategies in order to make high resolution heritage-grade captures of the current state of Elmina and other forts, create interactive visualizations which allows a global public to virtually experience these uniquely important UNESCO sites, and prepare a Historic Buildings Information Modeling (HBIM) resource to help the Ghana Monuments and Museums Board maintain the forts and castles in its custody.

These models are derived from hundreds or thousands of individual DSLR photographs to compose photorealistic 3D models with varying degrees of surface resolution, based on the quality of the photos, lighting conditions, and other factors. During three summer field seasons, Digital Elmina Project faculty and students have taken more than 60,000 photographs documenting 120 areas of Elmina Castle. Currently, 98% of the walls, ceilings, and floor surfaces of the castle have been 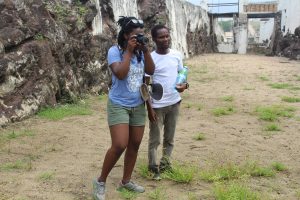 photographically recorded – a remarkable archive of the castle’s present state in 2017-2019. Many of these rooms were documented and modeled by Ghanaian and American undergraduate students being trained in photogrammetry. The team used Canon DLSRs and Agisoft Photoscan/Metashape software to create our 3D models, generally in the six to eight months following each field season.

To situate Elmina Castle within its larger environs, we used Unmanned Aerial Vehicles (UAVs, or drones) to photograph the castle from a variety of angles and altitudes. This allowed us to 3D model the entire castle in relation to the Atlantic coast, Benya Lagoon, and surrounding town, as well as to create Orthographic 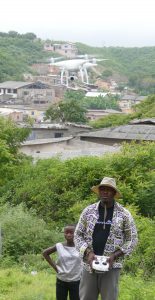 images and Digital Elevation Models (DEMs) for use in GIS analysis. This work was accomplished at an important moment, before and during the construction of a large stone sea wall that is changing Elmina Peninsula’s historic coastline. We are currently overlaying eighteenth-century maps upon the modern landscape to assess changes in size, depth, and position of the oceanic shore and the Benya River and inland lagoon. The digital landscape we have created will also be used to georeference previously discovered archaeological sites and guide us to identify the current locations of buildings and other features marked on old maps.

While photogrammetry can provide highly realistic and quite detailed digital models that are especially useful in interactive videogame engine-based simulations, laser scanning produces extremely high resolution (often sub-millimeter) surface models that are the gold standard of cultural heritage digital archiving. The models derived from registering overlapping individual point cloud scans facilitate careful study of building materials and analysis of internal wall dimensions and the relationships of interior spaces in both horizontal and vertical axes. The ability to create cross-sections and floor plans greatly advances both GIS and structural analysis initiatives while also aiding in deciphering Elmina’s physical evolution over time. 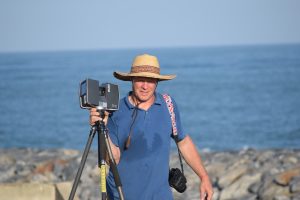 Between 2017 and 2019, the Digital Elmina team made 398 laser scans covering 92% of the castle’s rooms and open areas using a FARO Focus x130 laser scanner. Each scan took between twelve minutes and two hours to make, depending on its resolution setting. These scans were then knitted together through filtering and registration in the months following each field season to create a composite point cloud that currently exceeds thirty-six billion points

Upon completion of the 2019 field school and the registration of all laser scans, we have produced the first set of Elmina Castle floor plans since c. 1940, published in A.W. Lawrence’s Trade Castles and Forts of West Africa (1966). 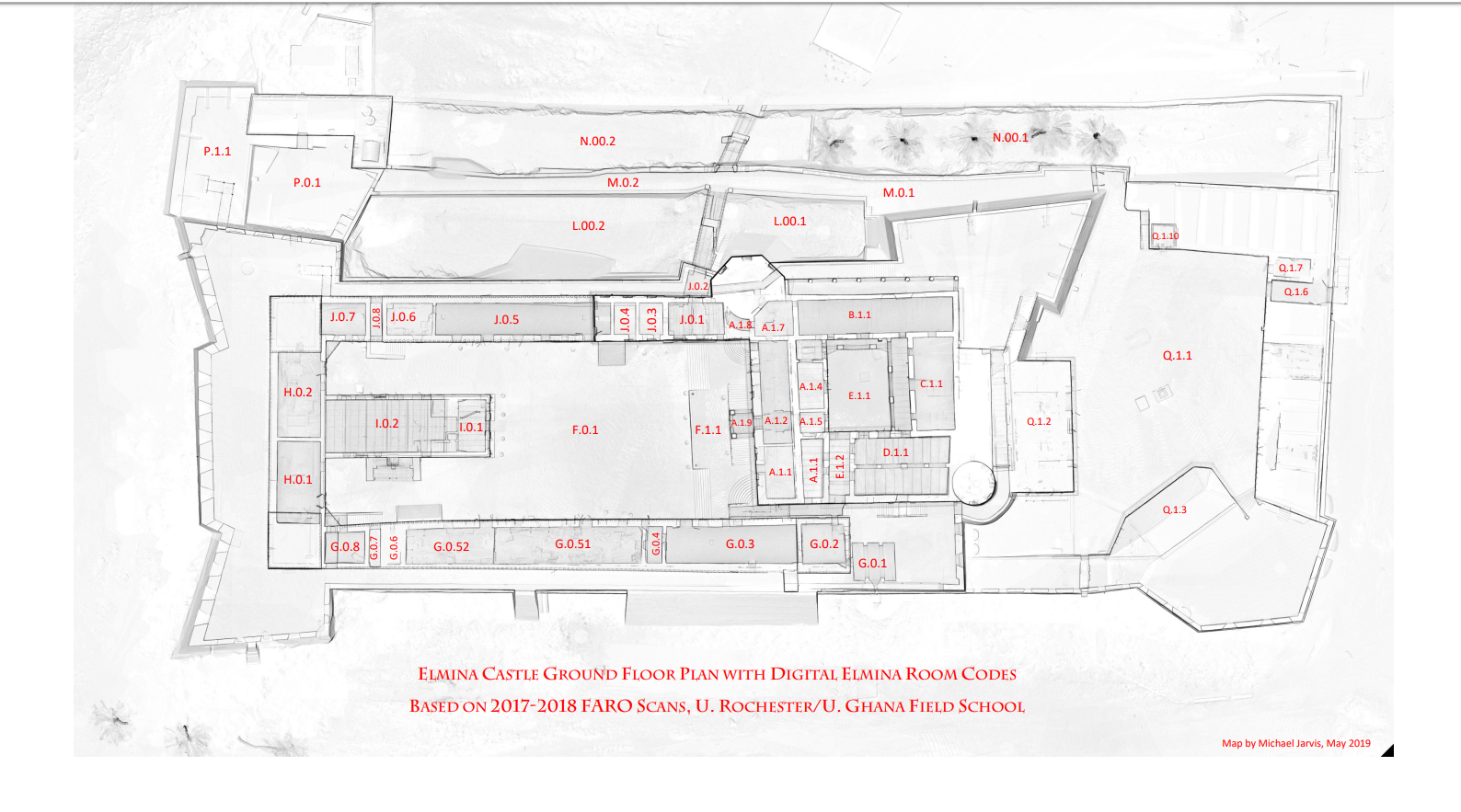 Close comparisons between these two sets reveal both errors made by the original PWD surveyors in 1940, changes made to mid-20th-century room configurations, and new areas of the castle that were revealed either in Lawrence’s mid-1950s “restorations” or the largely undocumented UNESCO work done in the 1990s. The Digital Elmina project also created a new and more methodical room identification system that eschews Lawrence’s employment of inferred room functions (such as kitchen, chapel, dungeon, etc.) in favor of an alphanumeric numbering schema which avoids attributions that can mislead interpretation until they can be corroborated through historic and cartographic research. With sub-centimeter accuracy, our new set of floor plans will facilitate  detection of structural changes in the future via observed deviations.